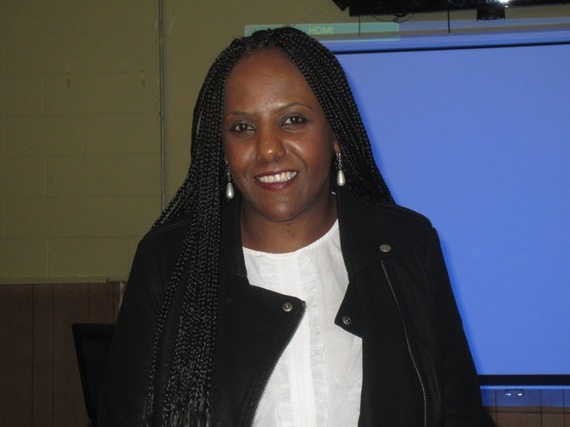 Every day Meron Estifanos answers her phone with an aching heart. From torture houses in Egypt, Eritrean hostages plead for ransom on a captor's cell phone. Help me. They are torturing us. Please, please. Estifanos, a native Eritrean who lives in Stockholm, Sweden, broadcasts these calls on her radio program, Voices of Eritrean Refugees.

Held at locations in North Sinai and in Egypt, the hostages scream of beatings, burnings, women raped repeatedly every hour, and babies deprived of food and water. Phone calls from families of hostages plead for help. Unless a ransom is paid, often set at $35,000, the mutilation and death will not stop. "For the last three years, this is all that I've been doing. I speak to them on a daily basis. We're talking about hundreds and hundreds of hostages, and many of them have died," said Estifanos, who co-authored The Human Trafficking Cycle: Sinai and Beyond.

For thousands of Eritreans, her radio program is their only lifeline, a glimmer of hope. Estifanos, a human rights activist, travels globally to speak before international and government institutions, seeking policy changes to end the ongoing nightmare of trafficking and torture of Eritrean refugees.

Estifanos said, "The whole international community is keeping a blind eye. The U.S. could stop this kidnapping and torture in a day if they wanted to. The U.S. is one of the biggest aid givers to Egypt, and they could make it one of their conditions."

The sound of torture she hears daily are not limited to direct physical cruelty to the bound and chained. They are the feeble cries of a newborn baby in a torture house, the post-traumatic delusions of a released hostage, the wailing of Eritreans in mourning. Now these sounds and individual stories are captured in a 2014 yet-unreleased documentary, Sound of Torture.

An Israeli film company followed Estifanos for a year and half, shooting footage of her work with hostages and their families. Estifanos was present at the Eritrean Community Center in Boston on March 8 to share a private screening of the film and to talk about the plight of the refugees.

Since 2004 over 200,000 Eritreans, many of them young adults, have fled to escape the brutal dictatorship of Isaias Afwerki where 18 months of national military service is the official term for long-time conscripted slavery.

Later in 2010, torture for ransom proved most profitable as refugees, most of them Eritrean, were kidnapped in the Eastern Sudan and Egypt's Sinai Peninsula, sold to traffickers and then shipped to torture houses in Egypt where captors demand payments of $20,000 to $45,000 for each hostage.

"In the last five years, $600 million dollars have been paid in ransom. The torture is done by the Bedouins and the kidnappings are done by the Sudanese during the Eritreans' escape into the Sudan," said Estifanos.

In Boston, Berhane Adhanom, age 67, is a co-founder of the Eritrean Community Center. A majority of those suffering in torture houses are young Eritrean refugees and he said, "it is important to me because young kids are the future of Eritrea. We are losing them in numbers. What is the future of Eritrea if this mass exodus continues?"

One wonders about the future of the very young who survive hell at the hands of traffickers. Estifanos remembers a call from a 23-year-old mother who was kidnapped with her one-year old son. Chained to others, she was burned and tortured in front of her child. In a desperate plea for ransom, she told Estifanos on the phone, "I want to die so badly, but I have to live for my son."

Unfortunately, the young woman died but her son was released and found a foster home in Tel Aviv. Last summer Estifanos traveled to Israel and visited the child, and observed, "He wants to hang people. He wants to torture other kids because he thinks it's normal. When I visited him he had burn marks all over his body. He's only three and half years old."

Journalist and activist Meron Estifanos zig-zags the globe determined that the sound of torture will finally move international institutions and the U.S. government to close down the torture houses in Egypt and North Sinai.

Email Suzette Martinez Standring: This email address is being protected from spambots. You need JavaScript enabled to view it. or visit www.readsuzette.com