in Eritrea, President Isaias Afewerki's regime allows no political opposition. Rights groups estimate that between five and ten thousand Eriteans have been imprisoned for opposing the government, usually with indefinite sentences and without a trial. In 2001 the regime imprisoned 15 politicians opposed to the President. One of those politicians currently detained is Petros Solomon, former Minister of Marine Resources. His wife was then arrested in 2003 when returning to the country from U.S. to visit their children. Indefinite imprisonment takes an emotional toll on the families of prisoners. Tsedal Yohannes, Aster's sister, knows this strain all to well. 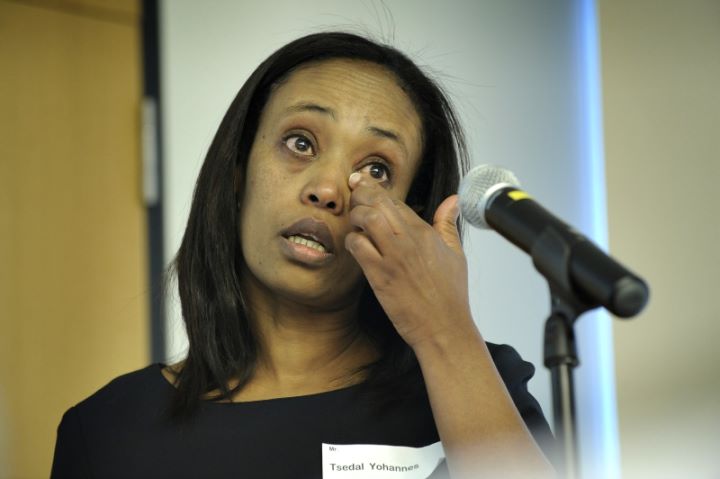 Tsedal, who lives in this seemingly ordinary terraced house in Walthamstow, North East London with two of her three sons, has an extraordinary story.

I’m here to find out how Tsedal copes with her sister and brother-in-law’s imprisonment and what she's doing to keep up the pressure on Afewerki’s regime.

Her fondest memory of Aster and Petros was when they celebrated the birthday of Aster's oldest son with a family trip to the beach.

“We bought birthday cake from Asmara and then one of my sisters who came from Canada, she bought roller-skating for the kids. And they were so excited and they spent the whole afternoon until late, 11 o'clock, learning how to skate in the corridor. So, I can see everybody was happy, all of us together, chatting, telling stories.”

Tsedal returns from upstairs with a shoebox full of photos from her time in Eritrea. She goes through them, explaining and reminiscing with a smile.

She points to a photo taken during a boat trip in 1998. Tsedal, Petros and his oldest son are in the boat. Everyone looks happy.

Her sister Aster and Petros both fought for the Eritrean People's Liberation Front that helped Eritrea gain independence from Ethiopia in 1993.

Tsedal explains that her sister and brother-in-law shared the same political views:

“But most of the time when we are together with a lot of people, most of the time we talk social issues and jokes and this and that. And Petros was, has got a good sense of humour. So when you sit with Petros, it's always fun. Of course, we talk also social issues. I'm sure Aster, she agrees, I've never heard them disagreeing on political issues.”

We’re joined now by 48-year-old Meriem Omer, one of Tsedal's close friends who was also a freedom fighter during Eritrea's war for independence.

Meriem says she helped Tsedal through the emotional trauma following the arrest and imprisonment of her sister and brother-in-law.

“By grieving together over the phone. Talk the background, the story. We laugh, we feel sad, we cry. So we share the emotions together. When we were fighting the comradeship was close, more than blood ties really. So Aster is equally, to me, a sister.”

Tsedal is a dedicated activist and plays an active role in the Diaspora group - Eritean Youth for Solidarity and Change.

The group is actively opposed to the Eritrean regime. Tsedal regularly hands out leaflets at Eritrean events and joins them on demonstrations in London.

Tsedal intends to continue in this vain until the thousands of political prisoners in Eritrea are released.