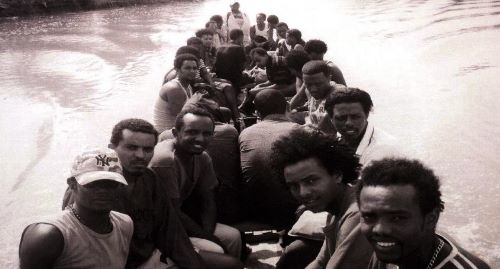 Some governments manage to develop a political system that literally arrests the development of the potential of its citizens.  That is one way dictatorships preserve their control over citizens.  In the case of Eritrea, the situation is even more conspicuous because the regime went as far as stifling the potential, frustrating the resolve and killing the spirit of the citizens. This skewed development emanates from the illegitimate nature of the government.

The proponents of the high-handed political system in Eritrea, Isaias and Co., live for themselves, not the people of Eritrea.  In order to preserve their hegemony they are constantly on the lookout for any ‘deviant’ behaviour that might challenge their livelihood. They know the free spirit of the youth is deadly when it reaches a critical mass.  For now Eritreans have become victims of the PFDJ regime.  And that is why the people, especially the young, are resorting to fleeing.

In recent years we have witnessed a number of mass defections by Eritrean athletes, for instance.  Just to mention a few defections:

There have been high profile defections as well.

·         In 2016, two Eritrean pilots defected with their fighter jets to neighbouring Ethiopia.

The list is long. We have witnessed government officials, diplomats, veteran freedom fighters, musicians, artists and so forth leaving the country.  The most tragic aspect of it all is the fact that the youth are fleeing in droves – 3-4 thousand youngsters a month.  According to United Nations statistics, Eritrea is producing more refugees per capita than just about anywhere else in the world.  Unfortunately, many die while making the perilous sea-crossings in a desperate bid to reach Europe.

We have consistently argued that the confines of Eritrea are closely guarded by the president and his PFDJ party, intent on pushing out citizens, the young in particular, deemed ‘excess’ members of the society.  Moreover, we have consistently argued that the threshold of the government’s moral-standing has gone so low it has stopped treating the citizens as humans with great potential but slaves.  Its ‘serve the government’ mind-set reflects the perverted order of its control over citizens.  Over the years that rigid mind-set became the bulwark of the PFDJ philosophy.  The reality that emerged out of this lopsided relationship between the PFDJ regime and the people of Eritrea can be described by the moral outrage it has created among the fair-minded citizens who view Isaias’ regime as a muck that has caused a major stain upon the country’s history.

In short, the regime has managed to deny the young to dream of proper dreams.  Now Eritrea has turned into a country where young people dream of leaving only.  That is a tragedy. Eritreans living inside the country and abroad continue to internalise this tragedy as it unfolds.  People’s empathy with Eritrean refugees is growing all over the world.  This moral laceration will certainly impact future politics in Eritrea.  A storm is brewing. The realisation that these segments of our society are suffering has driven home the importance of us becoming them.  We need to do more than going through the motions.